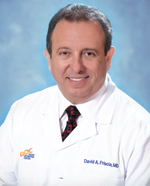 “Foot and ankle surgery is especially challenging with the breadth and diversity of patients, conditions, and the need to be creative in your problem solving.”

David A. Friscia, M.D. joined Desert Orthopedic Center in 1990 to serve as director of the Center’s foot and ankle program. A Southern California native, Dr. Friscia was raised in Long Beach.

He says he always had an interest in science and a desire to work with people, which is why he pursued medicine. He has been involved in implant design and research. In addition, he is an Assistant Editor of the journal Foot & Ankle International.